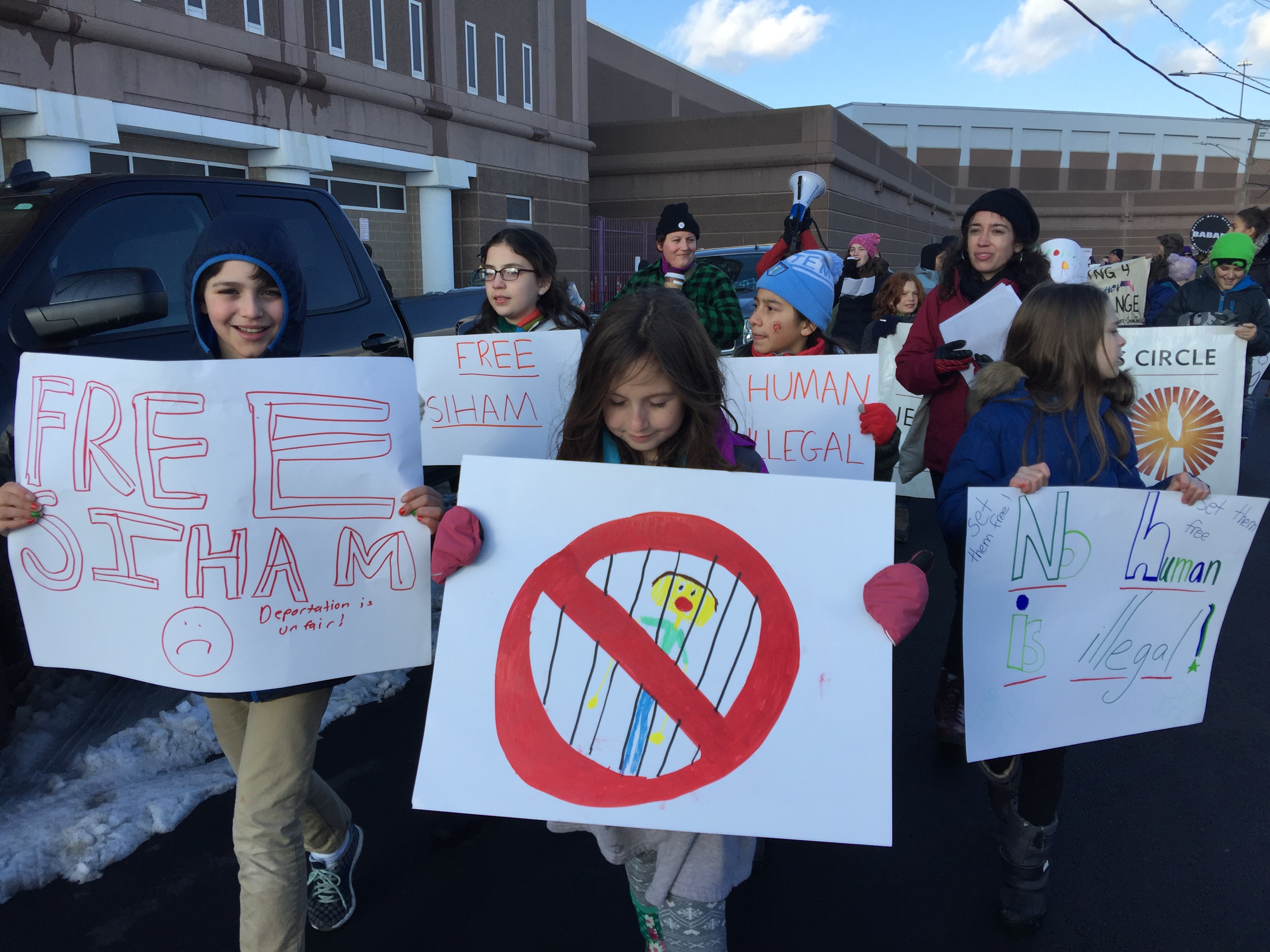 The sounds of musical instruments, singing and chanting burst through the cold, silent and stiff air outside the South Bay House of Correction on a Sunday afternoon.

A bunch of fifth graders from the Boston Workmen’s Circle Center for Jewish Culture and Social Justice Sunday School rallied on Dec. 10 to demand the U.S. Immigration and Customs Enforcement (ICE) release and stop the deportations of two Massachusetts residents, Francisco Rodriguez of Chelsea and Siham Byah of Nahant.

“We think it’s really unfair and that everybody deserves equal rights whether they have papers or not,” said Ilana Schwartz, age 10, rallying with her classmates outside the correction facility where Rodriquez is being detained.

Rodriguez fled El Salvador and came to Boston in 2007, where he applied for asylum and was denied. However, he had been granted a stay of removal, which is a temporary postponement preventing the Department of Homeland Security (DHS) from carrying out an order of removal. He is employed by MIT as a janitor and owns a carpet cleaning company. In July, ICE took him into custody, and he’s been detained ever since. He has three children, and he missed seeing the birth of his third child.

Byah, who is originally from Morocco, has lived in the United States since 1999 and is known for political activism in her Nahant community. She’d been granted stays of removal, but in November ICE also took her into custody. Her 8-year-old son has been in the custody of the Department of Families and Children since her detainment.

The group of 10-year-old activists held up signs that read #FreeFrancisco and #FreeSiham. They chanted and sang, and when the detainees banged on the windows to cheer on the protest, the students chanted louder, “We are here for you.”

Jake Sokatch, 10, looked up at the windows. “I feel both happy and sad,” he said. “I feel happy because I know that they’re hearing us, and I know that they are not alone. I also feel sad because they live in there and it can’t be a good life.”

Jenny Silverman is the director of the Sunday school. She was there, along with all the parents, supporting the protest. Every year the students focus on political activism. This year they chose to focus on immigration.

“They’re out here today to show that they can make a difference and to gather other people around and to learn how to put together a demonstration and make their voices heard,” Silverman said. It’s about choosing a topic that children can understand. “These issues of fairness, what’s fair and unfair, and pulling families apart is absolutely something that fifth graders really understand and deeply care about.”

Silverman said children learn a lot of things in school, but it doesn’t necessarily stick as a result of just reading about it. “For the kids, I guarantee you that in 10 years or 20 years or 30 years, they’re actually going to remember coming out and making a difference,” she said. “The kids are very pumped and excited about doing this.”

Amid all the excitement about making a difference, 10-year-old David Senuik said, “It feels inspiring, because if this protest leads to more protests for undocumented immigrants, they will eventually be set free.”

As he looked up at the detainees drumming on the windows, he said it motivated him even more. “I feel proud because if they get out, they’re going to be like, ‘oh, this protest was the reason,’ like, ‘this class was the reason that we got out of the correction center.’” He said he believes he will see a difference in one or two years.

The protest ran from 2 p.m. to 3 p.m. When it was time to leave, the fifth graders marched out still chanting, music still playing and with signs still displayed. In front of the correction facility, the sound faded out, and the silent, cold and stiff air faded in.