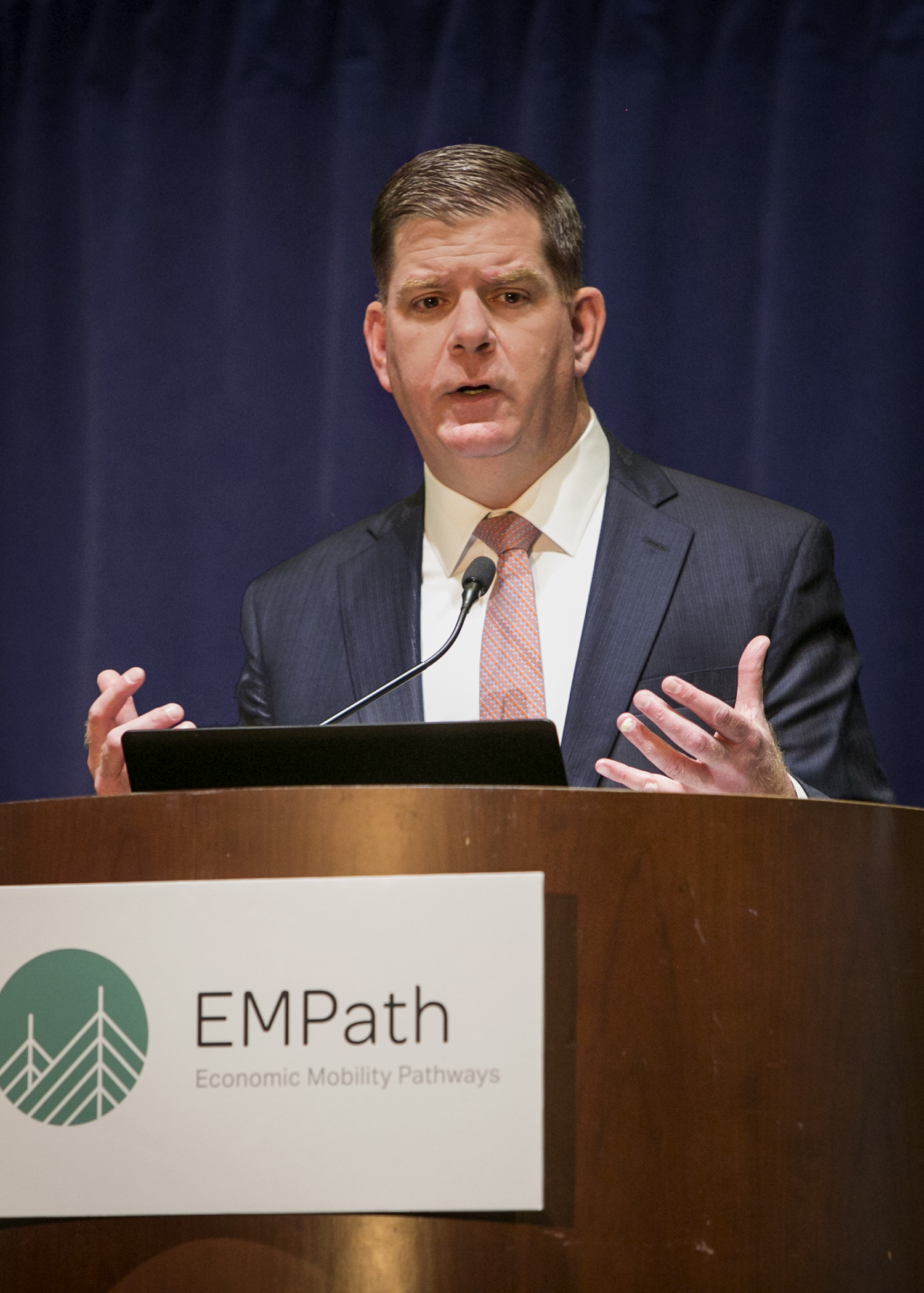 On Friday, Nov. 2, Mayor Marty Walsh spoke to a crowd at the Disrupting The Poverty Cycle Conference, hosted this year at the University of Massachusetts-Boston Campus Center. The conference, held biennially by Economic Mobility Pathways (EMPath), attracts researchers, community organizers, policymakers, and lower-income families to connect and discuss over two days new and innovative approaches to combating poverty within the city.

EMPath emerged after the Women’s Union and Crittenton, Inc. merged to become the Crittenton Women’s Union in 2006. Both founded in the 19th century, each organization individually served lower income households and provided resources and opportunities for those facing economic hardships. The coalition rebranded to its current name in 2016.

Mayor Walsh kicked off the second day of the conference with opening remarks, and while he relished in the fact that the city has become a hub for students, businesses, and families, he also voiced concerned that financial obstacles may be growing alongside population growth.

“Boston is a city that prides itself on global leadership in climate, equity and education,” Mayor Walsh told attendees. “Our biggest barrier to economic mobility is housing costs and affordable housing access.”

These comments parallel those made in a letter penned by the mayor earlier this week, in which he wrote, “As Boston grows, we must keep our focus on the families and communities that make our our city the diverse, welcoming and world-class place it is. To do that, residents must be able to afford to live here in the city they love, families must be able to grow, and young people must be able to make our city their home.”

The city recently updated its 2014 housing report to reflect new census data that predicts the city’s population will increase to over 750,000 people by 2030. In turn, Mayor Walsh increased the original goal of 53,000 affordable housing units to 69,000 earlier this year.

“We have a housing shortage built up over many years. We launched a housing plan to create 69,000 units by 2030,” Mayor Walsh  said to the crowd. “By the end of this year we will have created more affordable homes than any other four year period.”

Outside of Boston’s  housing situation, Mayor Walsh also commented on the economic inequality within the city, telling the crowd, “When I became mayor, we were number one in inequality. We sat down and understood data.” As of February of this year, Boston now ranks seventh.

Walsh acknowledged that there was room to improve not only in Boston, but in cities across the country.

“What we saw is true in almost every city in the U.S.,” the mayor continued. “Every city needs to make sure its success is fair and sustainable, but we haven’t made serious dents in poverty since the 60s.”

“Regardless of what’s happening on a national scale cities need to stand up and take responsibility. We need new tools and new partnerships for restoring economic mobility,” he said.

While the mayor held other cities accountable, he also asked that Boston residents make the effort to vote in the upcoming midterm elections, as their votes could help in curbing poverty.

“The middle class didn’t happen by accident  and it won’t come back by accident. We need to make sure that people understand that. On Tuesday we have an election and your voices need to be heard. Change is possible.”

The mayor was followed by keynote speaker Chuck Collins from the Institute for Policy Studies on stories about inequality and poverty, and the conference concluded in the afternoon.